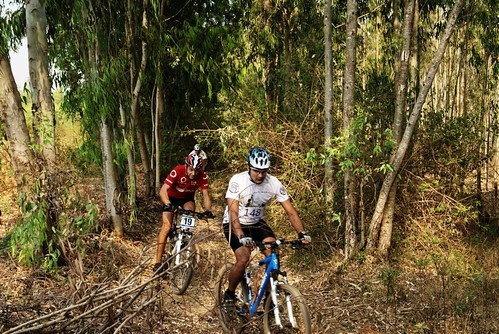 Single Track: from BBCh(Bangalore Bicycle Championships) March 2010, a trail ride with a mix of single and double track going by eucalyptus tress and fields. 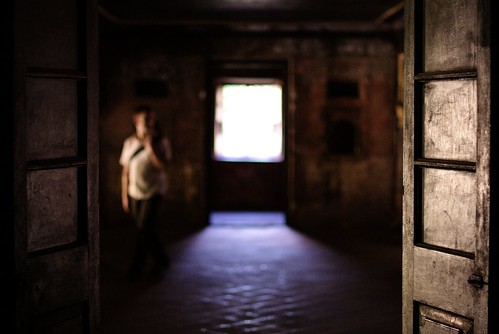 Entering the past: a visitor walks around Tipu's Summer Palace, Bangalore.

A mid-week holiday in January for Sankranti resulted in an evening shoot at a couple of places near KR Market. 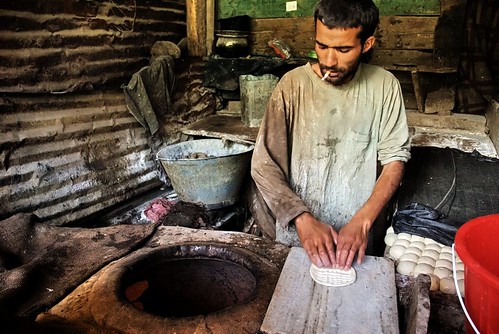 Making Kashmiri rotis: these rotis were slightly sweet and tasted best right out of the tandoor. Kashmiri roti being made at a shop in Sonamarg; Jammu and Kashmir, India.

Earlier when we had stopped at Kargil, we had seen people buying rotis from a shop and taking them wrapped in paper; we got a chance to see these being made in Sonamarg. Kashmiri rotis are like bread, in the sense you can buy them at local shops(and not have to have a tandoor at home). We had these for breakfast at Sonamarg at a restaurant with some curry and later saw that they were being made right in the next shop. The dough maker was busy keeping the newly made dough covered in a wet cloth to get the right consistency. He would take each ball of dough and expertly spread it out with his fingers while giving it a unique ridged surface before pasting it inside the tandoor, all in less than a minute. They were taken out with ease with long steel rods. We were offered a fresh one right out of the oven and it tasted awesome while still warm, we gobbled it up without requiring any curry. 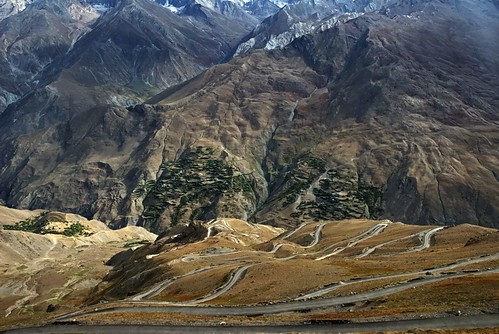 Switchbacks: the road to Umbala Top, the shortcut from Sankoo to Drass bypassing Kargil; Jammu and Kashmir, India. 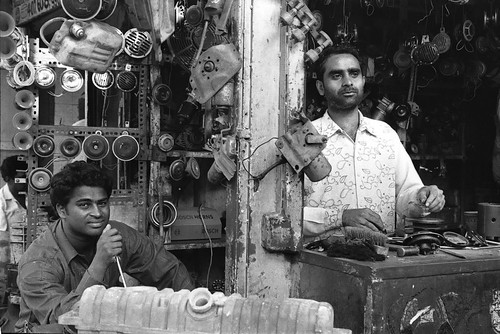 Old parts, new parts, spare parts and scrap, that is what you will find on Siddaiah Road in Bangalore; a one-stop place if you own a lorry, truck or tractor and need anything from leaf springs, radiators, horns to gears and transmissions. I had gone by this road some time earlier in the morning and had found all the shops closed and hence this shoot was scheduled in the evening. It rained a bit before we started but thankfully the sun came out after that. We started the walk from the Double Road side and turned back from Lalbagh road walking on the other side of the road; we did try to get some coffee/tea at MTR but it was too busy and we had them at one of the smaller shops on Siddaiah Road itself. The people themselves were friendly and inquisitive with the usual questions on why we were taking photos; only a few of them were busy while most seemed to be waiting for customers, chit-chatting with their friends or catching up on the news. The shoot ended with some discussion on film and cameras(since this was a film only shoot :).

This is also my first self developed roll of film. The film is Arista Premium 400 and was developed in Rodinal for 1hr with 30s initial agitation and 30s agitation after half an hour. 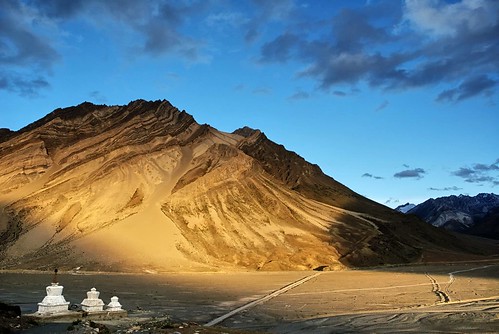 View from the monastery: view from the Rangdum gompa of the sun lit mountains; Zanskar, India. 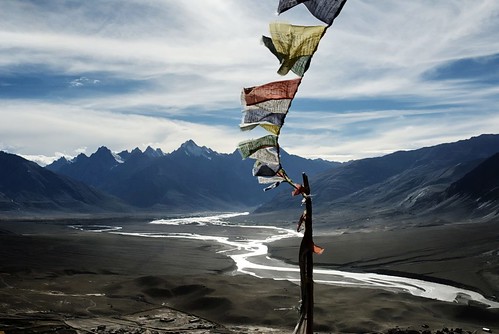 Zanskar: view from the Stongdey monastery of the Zanskar valley and river; Zanskar, India. 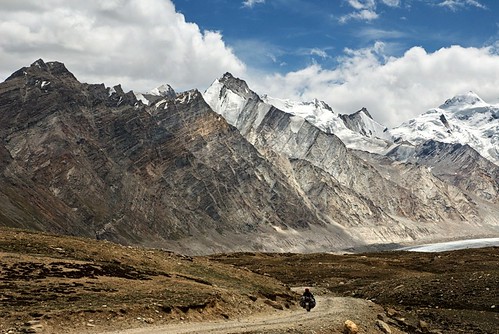 Zanskar valley: right after PensiLa, with a part of the Drang-Drung glacier visible in the background; on the way from Rangdum to Padum, Ladakh.

We went out of the house at 9am only to find the whole village empty, not one person visible anywhere. We waited for some time and then the lady of the house knocked on the door, pointed a sickle at us and asked us to get out; from her signs we understood that she had to go to the fields and had to lock up the house after we left. Collecting our luggage which had been stored in another room we were out after paying Rs.200/- for the warm night. After a breakfast of Maggi at the restaurant there, we were on the way to a short easy climb to PensiLa. Right after PensiLa is the Drang-Drung glacier; this is the largest glacier in this region but the massive scale of the glacier escapes the eye with the tall mountains surrounding it. The Stod(Doda) river which later becomes the Zanskar river originates from this glacier. It is almost a flat road after this and even becomes a tar road closer to Padum which we reach before sunset. We do take a break at the village of Atill closer to Padum, where we entertain and are entertained by a bunch of happy kids 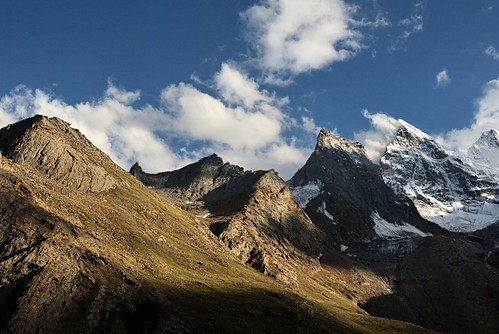 The first part of our journey to Padum in the Zanskar valley was from Kargil to Rangdum following the Suru river upstream. 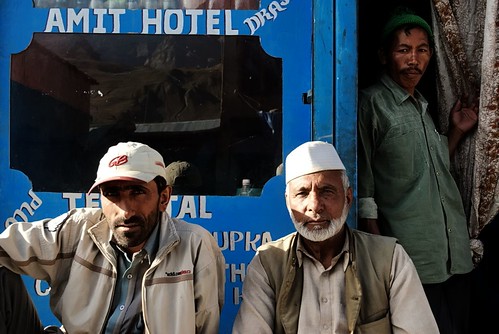 Diversity: in front of a small hotel where we had tea; Drass, Jammu and Kashmir.

Diverse, that is what describes the road from Srinagar to Kargil: starting with green fields near Srinagar going through villages, the pine covered hills near Sonamarg and then the bare mountains after ZojiLa, and all along following rivers and streams of different colors. We had started off a little late from Srinagar having brunch at a dhaba on the way and reaching Sonamarg a little after noon. Sonamarg seemed like a picnic spot, being close to Srinagar, with all buildings painted a particular shade of green which looked straight from Switzerland, we just rode on without even a break here towards the first pass on this road i.e. ZojiLa. And we missed the pass: we had been gradually climbing and then were riding on almost flat roads alongside the river before we realized we were already past the pass; after Sach Pass earlier in the trip we seemed to have overestimated ZojiLa. Anyway we were now following a dark green/gray river which got clearer as we got closer to Kargil, where the Suru river which is slightly brown in color joins the Drass river.